A school drop-out, who never lost the hope of completing her education along with a noble dream of imparting education to the slum girls of her community. The example that Aarti Naik has set for the young girls today is indeed inspirational.

Hailing from the western suburban slum area of Mumbai, Mulund, Aarti Naik was no different from the other slum girls who grew up amidst lack of proper sanitation, a severe shortage of space and not to forget the absolute absence of education awareness. Elder to her two siblings, Aarti was always the responsible and adaptable one among the three. Coming from a deprived background, she was not getting access to a good quality of education given which she failed in 10th standard and followed that her parents insisted her to stay at home quitting her studies. With an insatiable hunger to learn and stand on her own feat, she grew up as an independent woman.

She stepped out of her home and started to find work, but there was no work available for her, which compelled her to start working on craft jewelry at home. Earning Rs. 9 a day, later Aarti was able to save some money within 3 years, which she utilized in passing the 10th standard exam. Today, Aarti is pursuing her graduation in Sociology from Open University and she aspires to complete higher studies as well.

From six girls in the beginning, later in the next three months, 23 girls were enrolled in the classes of SAKHI for Girls' Education.

A Ray of Hope

The ordeal she faced made her realize the prevalent issues of education in the slum area. "Looking back to my own school experiences, I comprehended that there are several such slum girls like me who lack basic literacy and numeracy skills and this fact stops them to keep up with their formal schooling," shares Aarti. She immediately decided to take up the responsibility to educate the slum girls and prepare each one of them to be self-sufficient. However, this was not easy for Aarti and she knew that this journey is not going to be smooth. Her determination to achieve this set target was also at the peak.

Aarti recalls, "One of my friend from the slum suggested Ashoka's Youth Venture to me. It was literally the turning point in my life." Ashoka's Youth Venture rendered her with a Changemaker Fellowship and gave her an overall new identity. She received financial help for one year and helped her to build her confidence level. Later, with assistance from their continuous capacity building workshops, she began to conduct basic education classes for girls of primary school age. "It was in 2008 when I initiated my social venture 'SAKHI'- A female of girls who inspires, guides and supports other girls for a good cause," says Aarti.

The battle initiated in 2008 is still going strong with the constant efforts of Aarti. It was a roller-coaster ride for her, but she managed to travel it ignoring all the obstacles. In the initial days, it was a tough job to convince the parents of the slum girls. They used to often refuse me on educating their wards. But gradually I was able to make them understand the importance of education," pinpoints Aarti. She, in fact, did multiple part-time jobs to support and teach the slum girls, such was her persistence. A time came when her own parents' didn't support her on this journey, but later when Aarti began to receive appreciation from the entire country, they were proud of their daughter.

From six girls in the beginning, later in the next three months, 23 girls were enrolled in the classes of SAKHI for Girls' Education. And, Aarti singlehandedly has been teaching the girls. "Some kind donors around the world have been helping the cause and through the donations. I have today a classroom for my Girls Learning Centre and have launched the Girls' Book Bank, Girls' Nutrition Program, Girls Sport School and Girls' Bank," shares Aarti.

Many organizations awarded her, recognizing her selfless endeavors towards the society. To name a few, Karmaveer Chakra Award by the International Confederation of NGOs (iCONGO), a scholarship from Women Deliver, an US-based organization, recently the Femina Women's Award 2017 and so on. Nine years down the lane, now Aarti is helping more than 300 girls from her slum community and has the mission to let every girl complete her school education confidently with quality learning. 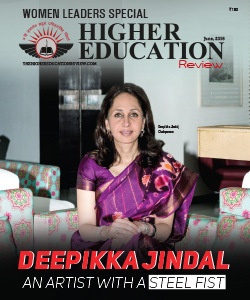