Satish (name changed) was a final year engineering student at a mid-tier engineering college. Four years ago when he joined the course, things had looked very promising. His father who was a small town shopkeeper had put all life savings in the engineering course for his son. Initially, things were looking up. The previous year the college had decent placements, with the average student receiving almost Rs 3, 00,000 as salary from the IT industry.

It was on this calculation that Satish's father had put his life savings in the course. But now 4 years later, when the time had come to receive the rewards of the investment, the climate is very different. Global economic conditions had slowed down hiring in IT industry. New technology trends like AI and Automation had added to the slowdown. The traditional models of IT support were falling away. Digital had made an impact and which overall resulted Satish in facing the prospect of a jobless start to his career.

The scenario above is playing itself out in most mid-tier engineering colleges across India. So what has gone wrong? Let's look at the US which produces around 1 lakh engineers per year for a $ 16 trillion economy. India, on the other hand, produces 15 lakhs engineers for a $ 2 trillion economy. Most of the engineers we produce are not employable. They were finding jobs in IT only due to massive training institutes much like the Infosys campus in Mysore. India had around 1500 engineering colleges in 2005. Today we have close to 3500. Andhra Pradesh has almost 700 of these colleges. Even before automation, it is estimated that 30percent of our engineers never found any jobs. The lucky ones that did found very low paying jobs are compromising with salaries that had been stagnant for almost 10 years.

Despite our best efforts, there is almost no demand for engineering jobs in India. The earlier mass recruiting sector was manufacturing, recruiting from the core branches of Civil, Electrical, and Mechanical. But, manufacturing is stagnant at just 17 percent of the GDP. So the core branch placements have become very difficult. The new mass recruiter is the IT sector. It grew from scratch to almost 5 percent of the GDP in 25 yrs. IT employed millions of engineers. Now, IT is also coming to saturation, only good Skilled IT Engineers are in demand.

"If you look at the sectoral composition of the Indian economy, most of the sector does not need engineers. Tourism is 10 percent of the GDP, does not require engineers. The financial sector, Trade, Hotels, and Restaurants do not require engineers and requirement in Health, education, Agriculture is also almost negligible." says Madhavan Satagopan, Technology Advisor & Business Strategist, Cognitive and Human Intelligent Systems.

IT is also coming to saturation; only good skilled IT Engineers are in demand.

So, essentially this is an unbalanced equation where almost 50 percent of our economy has no role for engineers but that's what we are producing in bulk. The average salaries for entry-level engineers are close to Rs 2, 00,000-Rs 3, 00, 00 PA, which is hardly enough to sustain high rents in metros or to pay off their expensive education loads. "For the nation, you can calculate the loss. Leave around 1 lakh engineers that NASSCOM says are employable. The rest 14 lakhs have each wasted 10 lakhs of fees that total to around $ 20 Billion which is almost equal to the Government's spending on healthcare. Over this, there is the loss of human capital." explains Madhavan.

An interesting plays itself out in the medical field where the quality of doctors has dipped the minute many medical and dental colleges started mushrooming. Incidentally, there is an acute shortage of nurses in India, but most parents prefer to send their children to engineering or medicine as they are more prestigious. So what's the solution to our situation?

For starters, the decision to pursue a degree should be data-driven. We should have a system to understand where we need the key skills. This insight should be made available to all schools and parents so that they can make very informed decisions. Parents must be encouraged to stop having rigid mindsets and start exploring alternate careers. This might require counseling and guidance from not only the school authorities but from central, state and local human resources centers. The focus should be more on vocational training at the Zila and village level. These students should be taught local skills so that they can support the local community and lead to its growth and development

Education is a key sector for the growth and development of the country. Unfortunately, we have a situation where we need to fight this situation with technology, with change management, and with data. But most importantly we need a mindset change that will fuel the growth for the next century.

Dr. Vikram Venkateswaran is a marketing leader and digital evangelist. He is the founder of Healthcare India, a social movement for better health. He is also an author and speaker at business and marketing events and alongside serves on the NASSCOM sub-committee on marketing and communication. He was awarded the Distinguished Toastmaster Award by Toastmasters International in 2013. 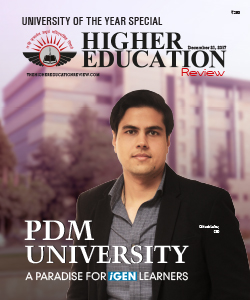