IMAGE Creative Education: The Reflection of Your Imagination

IMAGE GROUP is the only institution in the country that provides digital media education starting from kindergarten to post graduation. India's first professionally-managed Multimedia training institute, IMAGE CREATIVE EDUCATION has a pan Indian presence today with over 30 fully operational Digital Media training institutes that have trained over 60,000 students and assisted them in charting a successful career.

Ranjith was born in a quintessential Kerala village, where daily human life was viable without the help of modern technology. Like most of the 90's kids, he grew up watching movies that were broadcasted by 'Doordarshan' on Sunday evenings and spent the rest of the day at the paddy fields. He was 11 years old, when he was first introduced to watch movies on the big-screen. Since then, he says, he would not have missed even a single chance to watch movies in theaters and do not want to count the number of times he missed the classes to watch them on the day of release. However, it was not the heroic appearance of actors or charming presence of actresses that attracted Ranjith to the colorful world of movies; he was fascinated by the art of capturing live moments on a film roll.

When the passion towards photos and frames reached at its peak, Ranjith decided to stop his formal education after pre-university college and started searching for a place where he can hone his creative skills. While his friends opted for university degrees to secure a guaranteed outcome, Ranjith gained admission for Diploma in Graphic Design offered by IMAGE Creative Education, which had a strong presence across South India with its massive network of training centers covering even small cities. "18 months at IMAGE was worth taking that risk," says Ranjith, who has been placed by IMAGE as graphic designer in a Bangalore based web designing firm. Today, working as a Senior Art Director at a publishing house, Ranjith says, "Finding a course and artistic people to nurture your skills are as important as having a passion to create something new - IMAGE was a culmination of both. Today, I am more financially settled than my friends by doing something that I like."

Perhaps, Ranjith had an innate talent to capture the perfect moments through the viewfinder, which took him to through exciting paths of creativity and placed him on a fast track career growth. Having said that, what about others, who aspire to be in the field of creativity but think that they do not have that inborn talent? K Kumar, CEO of IMAGE Creative Education has a different take on it. He says, "Everybody considers creativity as a divine talent that is blessed by the almighty. It is not like that. Like any other discipline, creativity can also be practiced. Here, we are providing an opportunity to practice creative skills of our youth." With over 25 years of experience in Digital Media Industry, Kumar has been an ardent believer of this concept and his venture, IMAGE Creative Education, India's first professionally-managed Multimedia training institute, is a manifestation of his passion towards building a creative workforce for the nation's growth.

The Pioneer of Creative Technology Education

In the 90s, the concept of Digital Media seemed like an adolescent idea that would soon fade away. Traditional marketers were extremely skeptical about it and business investors and marketing consultants throughout the world proclaimed that it was merely a Silicon Valley idea that would die soon. However, Kumar was passionate to bring more youngsters to the world of creative technologies and ignoring all the risk factors involved he decided to setup IMAGE Creative Education at Chennai and Hyderabad. The market still hadn't matured and with 10 students, Kumar and IMAGE set out on a journey that has made a sea of changes in India's creative technology education. "Till 1999, it was very difficult to get the number of students. However, we were ensuring that there is no degradation in the quality of education. This philosophy helped us a lot and students became the ambassadors for our publicity," remembers Kumar.

In the last 20 years, IMAGE has grown from strength to strength and has a pan Indian presence today with over 30 fully operational Digital Media training institutes that have trained over 60,000 students and assisted them in charting a successful career. According to Kumar, this is not an aggressive expansion as he was more focused on offering quality education than quantifying his business. "We do not want to compromise on quality at any cost. Since, we are a 20 year old organization; we have good R&D team, who takes care of the quality of content and training of our faculty members," claims Kumar. With an experience that is long and wide in different areas of the Design and Media industry including Graphic/Web Design to Game, Fashion and Interior Design, IMAGE has established itself as a one-stop destination for any student aspiring to own a leading career in the creative industry. The institute constantly analyzes the industry trends and updates the course curriculum that can groom industry-ready students.

Apart from certification based trainings, courses at IMAGE cater to a varied group of students; be it school students, college students, corporate professionals or homemakers. Till 2002, the institute was only involved in vocational training. However, Kumar wanted to do more by bringing formal education in this sector. As a result, Image launched India's first Digital Media College - ICAT Design & Media College at Chennai in 2004 followed by ImageMinds in 2011 to provide a creative education platform for school children. "We are the only institution in the country that provides creative technology education starting from kindergarten to post graduation. Now, there are about 5000 students in our 30 training centers (Image Creative Education), 24, 000 students in 20 schools (Imageminds) and 2000 students in three Design and Media Colleges (ICAT College)," says Kumar.

Going a step further into the creative education sphere, IMAGE has partnered with National Skill Development Council (NSDC). As NSDC has joined hands with various organizations to render training services in different sectors, IMAGE has been selected to provide training under the Media and Entertainment sector. With this alliance, the organization will offer training services to more than one Lakh youth in a span of 10 years through its network of training centers across India. "The students of IMAGE undertaking any vocational/skill development courses, be it short term or long term, will now be eligible to avail educational loans from various nationalized banks. This alliance with NSDC will also open up more avenues for job placement," claims Kumar.

The enduring success of IMAGE does not end here. If everything goes according to the plan of Kumar, the institute will cover some of the unexplored territories of creative education in the years to come and will create a comprehensive system for creative education. Kumar, who has played an integral role in the establishment of the Digital Media industry in India, is also planning to author a book on Indian creative technology sector.

Kumar has over 25 years of experience in Digital Media Industry and has played an integral role in the establishment of the Digital Media industry in India. As the Founder and Managing Director, Kumar heads all business units of IMAGE Infotainment. 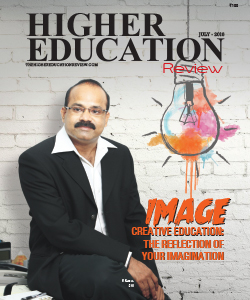