KSR College of Technology: Creating a Better Ecosystem for Students and the Surroundings

"Have the institutions over the past 60 years contributed to making our society and the world a better place?" During a convocation ceremony, Naryana Murthy, Co-Founder, Infosys, raised his concerns over the ability of nation's premier technical institutions for solving our society's problems. While, the media borrowed Murthy's comments to make headlines and did a postmortem of country's technical education; down south in Tamil Nadu, the professors of KSR College of Technology (KSRCT) were completely engrossed with their latest researches-to make the world a better place.

One such example is the Institute's research to find the therapeutic potential of garlic, which is a rich source of bioactive compounds and is used in folk medicine for the treatment of various diseases. The report submitted by the Biotechnology department of KSRCT reads, "S-allylcysteine (SAC), a garlic derivative has been reported to have diverse potential including antioxidant activity, anticancer, antibiotics antihepatotoxic and neutrotrophic activity. Data from our recent study clearly reported the therapeutic potential of SAC against hyperglycemic status in diabetic rats. SAC also reverses the alterations in carbohydrate metabolizing enzymes, and glycoprotein metabolism." To put it in simple words, KSRCT has uncovered the healing power of tiny garlic to mitigate cancer and diabetics, which are common diseases with a tremendous impact on worldwide health. However, it is not only the medical field that benefits by this research. India is being the second largest producer of garlic in the world, the research outcomes of KSRCT will help the authorities find new grounds for the cultivation of this commonly consumed food commodity as a medical product.

Located in Namakkal district where majority of the population are engaged in agriculture, heavy automobile factories and poultry business, KSRCT's presence has been influential not only for students across the country but for the farmers and other industries located in the district premises as well as for the nearby areas. Dr. K. Thyagarajah, Principal, KSRCT says, "We have done good number of projects with the textile industry, pollution board and farmers of turmeric and sugar cane in the Namakkal district and nearby districts like erode and Coimbatore. In the past 3 years alone, we published approximately 487 research papers in various reputed journals."

Unlike many private engineering colleges in the country that have undertaken research as a major concern in recent times, KSRCT has been in the research front since its inception in 1994. Dr. Thyagarajah, who has been associated with the institution from the beginning, has a good memory of the initial days. He remembers, "KSRCT is the first engineering institution in the district of Namakkal. It was a time when getting qualified faculty members was a tough job. However, the management built a faculty pool with three PhD holders and we setup many research labs in the initial days." Being the pioneer of engineering education in the region, the labs and methodologies that have created by KSRCT have been prototyped by the many of their followers in the district, which are more than 30 in number now.

Today, KSRCT has grown from a tiny college that had 240 student intake in 1994 to a massive autonomous institution with close to 2000 students joining every year for various undergraduate and postgraduate programs. In that process, the institution has managed to build nine potential research centers approved by the infamous Anna University. While, more than 416 faculty members have been employed to facilitate the students to cope up with demands of today's industries, the institute has 85 PhD holders and 135 faculty members pursuing PhD to take up the KSR's tradition of research further.

While the institute enjoys its supremacy in the engineering education of Namakkal and nearby areas, Dr. Thyagarajah and his team of highly experienced faculty members have developed comprehensive proposals for the next level of quality improvements in the automat system. He shares, "We have achieved provisional accreditation of NBA under tier-I based on the Washington Accord for five programs. Now, we are in the process of implementing choice based credit system proposed by UGC and preparing for getting full accreditation tier-1. We are also facilitating students with on online courses in association with QEEE NPTEL NMEICT." Upon seeing the efforts from KSRCT for creating a better ecosystem for students and surrounding communities, one thing is evident; it is not only the 'double-I' technology clan that provides quality engineering education in the country, but many more like KSRCT have come into the picture with innovation and research as their major driving force.

He is the principal of KSRCT. He joined the institute in 1995, after 15 years of teaching experience from REC Surathkal, Dr. Thyagarajah has played an important role in setting up various research labs in the institute. He is a PhD holder in Power Electronics and AC Motor Device from IISc, Bangalore. 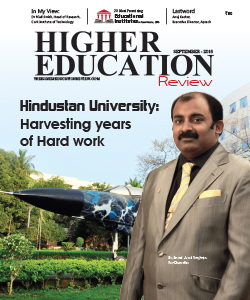