While many desire change, only few have actionable plans to do implement change. With plans to make changes in the society, a 35 year old man boarded the bus from Manipal to Delhi to appear for the Commonwealth interview. But destiny had other plans in store for this man. Midway when the bus halted, he got off the bus for refreshments and the bus departed, leaving him stranded in the middle of nowhere. He did not have the faintest of ideas on what to do next. The night was pitch black and all his belongings along with his documents for the interview were on the bus. In that dark moment he saw light, it was coming from a two wheeler. To most people this would just be an opportunity but this was Prof. B.S. Satyanarayana's guiding light. From here on he would go on to live a life like he never had.

In haste, he stopped the biker and narrated everything that had happened to him on his journey so far. On hearing his problem, the biker without a second thought decided to help him catch the bus again. They rode into the dark night taking wild routes through the forest and to his great surprise; the biker reunited him with his bus and his life's work. This man, who had lost everything he had built in his 35 years of existence, now found everything just the way it was. It was all made possible by a complete stranger who showed him what it was like to be human. "I never saw his face or asked his name but to this day I thank him for what he did for a stranger in the middle of a night. It was just one human being helping another without any hesitation. I carry this lesson with me and put it to the best use through education. This is the perfect field for me to operate and impart these values," says Prof. B.S. Satyanarayana. Today, the professor's passion for teaching and influencing his students is something that is undeniable. One of his favorite things about Liberty is the students and the impact he is able to have in their lives through teaching.

Why the education sector?

On paper it was a demotion for Prof. Satyanarayana. Prior to being offered the post of a principal at RV College of engineering, he was recruited at the US embassy as a scientific affair specialist and an advisor on environment and health. A lot of eyes and questions were raised when he quit the US embassy board to take up a job as a principal. "I ended up facilitating a lot of areas. Especially, the processing area and I think because of what we did back then, today, no Indian scientist or engineer has to wait for more than 10 days to get a yes or a no response from the embassy. I knew then, that I could do more and decided to step foot in the Indian education sector," says, Prof. Satyanarayana.

Today, after taking his chance at education, he is currently involved in transforming RVCE into an international standard institution with a huge emphasis on experiential/immersive learning, research and strong industry academic link. His initiatives in the last 4 years has led to ongoing funded research from government and private agencies of Rs. 50 Crores (compared to 4 Crores in previous 46 years) and establishment of 25 company based labs inside the RVCE campus. "For me it was a personal challenge because this institution operated on merits not connections, I chose this. My life has always been about making a change and through this I got my shot, at making a pedagogy to better the quality of future generation of college students," Prof. Satyanarayana.

Today, as a man of vast knowledge, he works dedicatedly on outcomes and implementation of projects worth not only in currency but also in human values. He is also an accomplished writer who has published over 120 papers in journals & conf. proceedings and guided multiple UG/PG and Ph.D students. "I had a long and interesting career. I started working at the National Physical Laboratory and was involved in setting up India's first complete indigenous fabrication facility for DLSI. From there I went to Cambridge University, where I met a Japanese professor and then later set a company in Kochi-Japan. I have worked with Koreans, Japanese and Russians all over the globe but I came back to India for my family and for all that I thought my nation needed in the education sector at that time," says Prof. B.S. Satyanarayana.

When he came home, leaving everything behind, he had a clear vision of helping the Indian education sector with all the experience he had gathered during his stints around the globe. He was a man with a mission, someone who wanted to genuinely help another for the betterment of the society. When he became the principal at RVCE, he saw an opportunity to help and transform higher education in India as a whole. Today, a man with 29 years of experience in India and abroad, in Industry, Academics and Government agencies, his stats at RVCE speaks for him and how he has played a major hand in transforming them from a good teaching institute to a truly global academic institution, which was teaching, researching and helping the society. 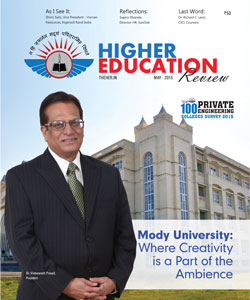