How often does an institution have a limited pool of faculty in the early stages of its establishment, yet provide a rich learning experience to rival the established institutes possessing a large body of faculty members and resources. Sharda University\'s Department of Mass Communication has set a benchmark for maximizing resources and succeeding in enriching the learning experience of its students.

Ever since its inception in 2009, the university\'s Department of Mass Communication under the School of Art, Design and Media Studies (SADMS) has taken a considerable leap in training future media professionals. The department boasts of faculty members having expertise from the industry as well as from strong academic background. Prof. Harsh Ranjan, Head, Department of Mass Communication, takes pride, declaring: \"Our faculty are working media professionals and this is an added advantage for our department to inculcate the nitty gritty of the profession to our students.\" Prof. Ranjan pinpoints the importance of the teaching methodology which has been the lynchpin of the department\'s operational success. Though media is a field-oriented profession, the university\'s learning methodology gives an equal importance to both theory and practical aspects of journalism.

According to Prof. Ranjan, \"Media is 50 percent content and 50 percent of technology and marketing. Students are trained by being exposed to live events such as parliament sessions which demand the use of resources for content creation and in turn build their own perception and receptiveness.\" Aside from the main syllabus which comprises of principles of mass communication, PR and Advertising, television and news production, convergence media, the curriculum has added gender sensitization, dharma and media laws and ethics with a view to incorporating the true spirit of journalists and media professionals. Case studies of major media organizations are another prominent part of the curriculum which is said to have initiated two important values in students. Firstly, students are rid of their inhibitions and are supplemented with relevant information. Secondly, a relation is established with the media houses and to-be media persons. Offering two courses B.A and M.A in Journalism and Mass Communication, the Department currently has student strength of 290.

As most of the faculty members are closely associated with media organizations such as Sahara TV, CNN-IBN, CNBC, IBN7, Lokmat Times, NDTV; the Department organizes numerous seminars and workshops for students and also runs faculty development programs. Some of the notable media personalities such as Surya Gangadharan and Sanjay Banerjee are actively related with the Department as visiting faculties. Academic collaborations with I-nurture, WLCI and 20 other institutional relations have helped in reforming the growing Department.

The Department facilitates students with TV studio, editing room, PCR room, well furnished computer labs, Canon DSLRs, audio recorders, teleprompter and a community radio \'Suno Sharda 90.8\' managed by the students as part of their training. Research works and creative content including films and documentary are part and parcel of the curriculum. Some of the works of the faculty include HRLN film and documentary such as \'Assassination\', \'Manipur in the Shadow of AFSPA\', \'Till the Bitter End\' and \'Ek Minute ka Maun\'. The institute has also put some effort in maintaining alumni relation with a continuous process of connecting them as well as their media recruiter and take feedback to help in the betterment of the department.

To be at par with several other established media institutions, the department has several plans to take its reputation to new heights by introducing new courses in sports, business journalism and new technology. Some short courses on video editing, still photography, voice over training and video camera training programs are to be introduced.

\"A student pursuing a course would look for avenues to practice and excel in it, so we train them to work under pressure and flexibility to evolve them into fine leaders of media,\" adds Prof. Ranjan. Thereby, Sharda\'s Department of Mass Communication has been successful in procuring jobs for the students in some of the leading media houses in the country guided by just 15 elite faculty members by maintaining a strong and dynamic level of education imparted.

Awarded as Young Journalist of The Year (1995), Prof. Ranjan is an active journalist for the past 25 years and has been long associated with Aaj Tak as an Editor. He has an MA in Journalism & Mass Communication and M.Sc. in Chemistry and Diploma in Convergence Media & Film Script Writing. He has over 1,000 news report publications and broadcasts to his credit and expertise in broadcast news management and communication and voice training. Currently pursuing PhD from Sharda University, Prof. Ranjan is Professor and Head of the Department of Mass Communication at Sharda University. 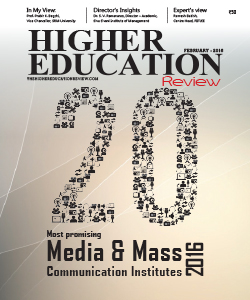