Crossing the Threshold - Campus to Corporate

A recurring discussion of late in a number of corporate circles is the inability of the country's higher education institutions to sufficiently prepare the millions of college graduates to integrate into employment effectively and quickly. Analysis reports and statistics highlight trends that suggest that one of India's key challenges to realize and sustain the growth of its expanding economy could be its ability to upgrade, with alacrity, the mainstream education to mirror and address the competencies required to succeed in the real world. One of the recently published surveys on 'unemployable graduates' pegged the figure at 47 percent - in a country which has 700 universities, with over 35000 affiliated colleges contributing more than 20 million graduates annually.

While the specific needs and expectations may vary between each industry, there is largely a consensus on the areas that the fresh graduates excel at and the ones they lack in. The biggest advantage with which graduates enter the workplace is their competitive spirit and eagerness to succeed. The education system instills a strong tendency to compete and win, which, deployed in the right way, is critical in the workplace as well. The challenge for most new comers is making the paradigm shift in the interpretation of competition and success going from individual brilliance to collective excellence. Having trained for years in an atmosphere that fosters the interpretation of success as defeating others, the transition in mind-set to an approach that necessitates working collaboratively in order to succeed, is often not an easy one. Reward and recognition which hitherto was directly proportional to the width of difference between the capabilities of individuals, now manifests itself more with the closeness of individuals, in other words - the working of teams. This requires in many ways, an unlearning of skills honed during formal education and retraining on a new set of capabilities.

Another aspect that most fresh recruits are good at is the ability to meet deadlines. A heightened eagerness to prove their worth and get ahead by making a positive impression is demonstrated most prominently in deadline driven assignment situations. Similarly displayed is the ability to work with technology and information. Modern day graduates are savvy in searching for and collating data from the web. But very often there is a lacuna in translating the information into meaningful analysis, which is a truer indication of cognitive ability. The scales are heavily tipped in favor of the doers, rather than the thinkers. An enquiring, probing mind which is the precursor for all breakthroughs and achievements is quite often the rarest commodity at the work place. In their eagerness to appear 'settled in', and perhaps due to the conditioning during education which instills the approach of 'passive acceptance' very firmly, new comers to the workplace hardly ever appear to take to questioning as a means to understand and assimilate.

Most young people who enter the workplace are also comfortable with the idea of socializing and networking. The increased presence and impact of various social media and their innate comfort with the same introduces to the workplace openness and visibility that was quite alien and unimaginable before the last decade. There are however instances of the social media avenues being used as platforms for sharing of all kinds of information. Prudence on the issues and opinions being shared, beyond the mere adherence to the mandatory bindings laid down by the respective company, is critical.

Much has been said and is continually being discussed around the communication abilities of graduates who enter the corporate world. The challenges lie in all areas related to communication, ranging from language skills, clarity of thought and expression, and listening skills. While all of this, including the obligatory formal presentation skills, e-mail etiquette etc. is spoken about most of the times, areas such as the ability to interact with respect and candor, humility and warmth are often completely forgotten, rarely mentioned, and perhaps considered redundant by many youngsters. The importance of observing and learning is also not to be undermined. While a number of companies have buddy or mentor initiatives to integrate the new comers, it is quite common to find the fresh graduates eager to be on an assignment or project of their own, rather than display the patience to shadow and learn.

The zeal to perform, the ambition to grow and the will to prove are some of the hallmarks of most people stepping onto the first rung of the career ladder. Sometimes, the areas of appearance and dressing, seemingly considered as being lesser important are side-lined. While the creative industry often stereotypes appearance and dressing as being the least important factor, most other industries expect and acknowledge a consistently professional demeanor of its employees. Young recruits tend to focus on it sporadically, rather than as a habit.

While the arguments and statistics regarding the employability quotient of university graduates continue to rage on, the educated youth, with the enormous reach of technology at its disposal, would benefit in a huge way by making a conscious attempt to understand the ingredients required to succeed in the work environment. This would provide them a head start in their quest for success and growth, and with the ample investment of time and effort in the right direction, give them with a sound launch pad for their career.

She is the Head of People and Strategy at Grundfos Pumps India Pvt Ltd. With over 19 years of experience in the areas of Human Resource and Business Development, she has worked in various companies gaining global experience and hopes to enhance the workplace at Grundfos India. 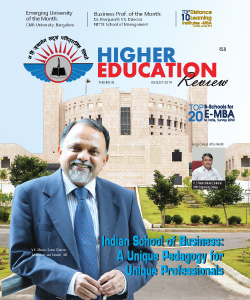