Sona College of Technology: The Oasis of Technical Education

"The Wizard of Menlo Park," the nickname earned by Thomas Alva Edison who lit the world by inventing the incandescent bulb and patented his enormous number of inventions. Generations after, another prodigy has risen from an obscure village in the southern state of India, Tamil Nadu. He is travelling in the path shown by great scientists before his age and has already patented seven of his 30 inventions. Nishanth, a first year student at Sona College of Technology, Salem started developing his innovations at the age of five by making an alarm connected between his bag and pencil box so that nobody could steal his belongings. "When you want something, the whole universe conspires to help you achieve it," the immortal phrase that has inspired millions holds true for this wondrous boy. The management of Sona College realized the real potential of Nishanth and offered him free engineering seat in contempt of the marks that he scored in the eligibility examination was not enough for a merit seat. Sona's research centers were the real oasis for him to emerge as winner by thinking ahead of more than 5000 young engineering brilliance including IITs and NITs from India, in 'innovation jockey season 2 program' conducted by the techno major, Accenture.

Nishanth's achievement was an outcome of collaborative effort from Sona College of Technology and their faculty members who guide all of their students research related activities. A liberal academic culture is always a great inspiration for innovations and it is evident that the campus of Sona College is delivering the same. "A student must prefer to come to college rather than stay at home. A college should not be like a punishment center for a student, only then will he be motivated to study," says Prof. Dhirajlal, Secretary, Sona College of Technology.

Realizing the fact that innovation and research are major aspects of technical education, the management provides opportunities to students and staff alike with the freedom to develop innovative ideas for new and challenging ventures. This creates the spirit of creativity and innovation within the institute. To cite a case, a group of Mechanical Engineering students who were given complete support by the management and a free hand ended up winning the Best Engineering Design Award at a national race car design contest. They are now heading to the U.S. to participate in another similar but international level design contest.

With the intention of cultivating more technology enthusiastic minds, the campus extended the research activities to include Nanotechnology, High Voltage Engineering, Specialised DC Motors for customised applications, CAD-CAM, image processing, robotics, micro-machining using nanotechnology, and green building technology, to name a few. The institute can proudly say that one their projects developed for ISRO in their research and development centre that has specialised in designing, developing and producing brushless, slot-less DC motors for custom applications, is successfully performing its function in one of the PSLV satellites presently in orbit for over a year now.

As of today, Sona college offers twenty programmes including seven undergraduate programmes, 11 Master of Engineering programmes, an MBA and an MCA and PhD programmes in about a dozen avenues of research. The active placement and training cell that conducts various training programs to equip these massive strength of students with right talent and personality to face the industry requirements make sure that the each of them are uncovering a good space in the top-notch companies even before they complete the course. With one more semester to finish in the 2013-2014 academic year, around 400 final year students of Sona College are attending their regular classes with an offer letter in the bag. In addition to it, the college received AICTE-CII Award for Best Industry Linked Technical Institution for 2013, competing with 1050 institutes comprising the best engineering colleges across the country. The award highlights the institute's strong linkages and collaborations with the Computer and IT Engineering Industries and displays its industry-linked centres like, the IBM Centre of Excellence, Infosys Campus-Connect, Microsoft IT Academy, CISCO Networking Academy, Accenture Innovation Centre and many of its industry-oriented initiatives.

With a plan of extending the education platform to global level, the institute has managed to get an academic collaboration with Syracuse University, New York, U.S., and by the understanding, the two institutions will jointly offer a two-year MS in Computer Engineering of Syracuse University. The students will study the first year at Sona College and the second at Syracuse. This is an AICTE-approved program and it adds a new dimension to engineering education in India. The institute is also one of the two colleges that has recognized by AICTE to admit foreign students in engineering. The college is now accommodating students from 27 countries in its campus.

In the journey of 16 years of engineering education, Sona College of Technology has turned out to be a haven for many engineers to follow their dreams. This has become possible due to its key players, Mr. Vallipa, Chairman and Mr. Dhirajlal, Secretary. As there is much left to achieve, the college is proving that, they are the real alchemist for enthusiastic learners like Nishanth. 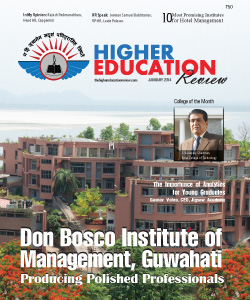