Together to the Top

Delhi, the capital of India, is a city of heterogeneous culture. People of numerous races, castes, creeds, religions, languages and nationalities live together here in harmony. Hence, to the cosmopolitan Delhi, education as a major factor that nurtures tolerance and higher ideals of life bears a special importance. There are over 15 unitary universities and more than 20 AICTE approved autonomous private institutes in Delhi. The South Asian University is a welcome addition, making Delhi an education hub for students from neighbouring countries. In terms of equipping Delhi with world-class education, research and innovation capabilities, The Delhi Technological University has been a successful establishment. On the top, the well-known institutes like All India Institute of Medical Science (AIIMS), Indian Institute of Technology (IIT) and Indian Statistical Institute (ISI) add special status to the city by promoting sheer excellence in education.

It is also heartening to see the Delhi Government undertaking various planned interventions to improve the capacity of public education system. However, the administrative bodies need to realize that a knowledge hub cannot be created by solely focusing on improving the quantity of educational institutions in the city. While, many of the unitary universities are highly specialized and catered to a very small student population, the two major affiliating universities, Delhi University and Guru Gobind Singh Indraprastha University, register more than 90 percent of the students. At present, most of the affiliated colleges do not have the academic freedom to design their programs and curriculum. The centralized control and uniformity across several colleges embedded in the current model of affiliating university restricts the scope of innovation, and hence excellence in higher education. Therefore, it is advisable that the further expansion of higher education in Delhi takes place by creating modern kind of institutes that are completely autonomous in designing their programs and curriculum.

This issue of the Higher Education Review is focused upon the higher education scenario of Delhi. In an attempt to identify the best educational establishments in the city, under the banner 'Institute of the Year - 2016, Delhi,' we feature some of the most trusted educational institutes that are displaying their best performance in various sectors of education. On the cover, we feature, GMR Aviation Academy that has emerged as a Leader in training and development of global stature from a modest beginning in 2009. 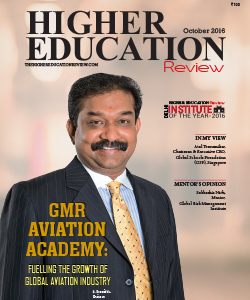