Animation is the fastest growing sector in India. The Sector is in demand for a wide range of talented and skilled person. The art form continues to be a platform awarding significant opportunities for creative and imaginative individuals. Technology and creativity are continuously improving and becoming a universal means that drives the use of animation in various sectors. Animation is sequence of images created by means of using computers and various software applications. Animators deal with modeling, shading, animation, lighting, and rendering using software programs.

Animation content is experiencing a bigger transformation in India. Over the last decade, the Indian animation industry has moved up their production services from an outsourcing model to creating its intellectual animation property. Which enable the animation producers to generate higher revenues and profitability from an end to the endpoint by selling new local content to television networks in India. Broadcasting channels are increasing their content mix for more local made content as against the imported content. Year on year there is a larger intake of local content by the kids' entertainment channels including some of the regional broadcasting channels. (KPMG, 2017)

A decade back, Kids Television channels were mostly dependent upon the content purchased from the west and across the world. Animated episodes like Mickey Mouse, Tom & Jerry, Dora, Pokemon, Super Sonic, Spiderman, Popeye and much more were imported. This business model had worked well since all these western animated characters were popular, accepted and successful. They reached Indian children through various distribution channels, animation agents, licensing and merchandising. The television broadcasting channels had to just work on the dubbing and editing task if they were to be telecast in the regional language if not the content came ready for the telecast. This model proved successful since the cost of importing was much lesser than that of producing a brand new Indian animation content.

Over the last decade, the Indian animation industry has moved up the production services from an outsourcing model to creating its intellectual animation property

Today, the mix of local to imported animated content is experiencing a bigger transformation and our Indian animation industry is gaining its importance among the global animation industry. Broadcasting channels are increasing their content mix for more local made content. Over the last decade, the Indian animation industry has moved up the production services from an outsourcing model to creating its intellectual animation property. Year on year there is a larger intake of local content by the kids' entertainment channels including some of the regional broadcasting channels.

The growth of Animation industry in India is remarkable. The opportunity for the Animation Producers to sell new Indianized content to television networks has compelled the rise of coproduction and distribution partner's activity thus reflecting on the health of Indian television animation business model. Apart from this, studios now are also creating local characters, stories, and themes that have a longer shelf life and that can be monetized through various channels. Creating a business model around the popular character like licensing & merchandising, mobile games, Internet games, product endorsements, events, exhibition and theme parks around animated properties, that has worked very well with overseas studios such as Disney, Pixar, and Universal Studios theme park.

There are licenses for a range of products categories like Toys, Back to School, Electronics such as Mobile, Laptop, Laptop Skins, Pen drives, Headphones, Watches, Bobble Toys, Fashion, Electronics accessories and more providing range of items to all age group from kids zero to adults. Licensing & Merchandising in India though is a smaller market of about Rs.4000 crores ($600 million), is growing tremendously to hit double-digit growth in the future.

Tie-ups with Universities in other Countries for student's exchange is a great combination enhancing the learning of the students. The Degree in Animation Programme is the perfect choice to groom you into an industry-ready animation professional.Students should choose Universities that has extraordinary infrastructure & excellent mentors with relevant industry experiences with Industry endorsed course curriculum and good placement record.

The Scope of Work

Indian is gaining its feet over animation, visual effects, gaming and comics in compared with other competing countries. It is been more than a decade, and we are better in terms of its credits in Hollywood Feature Films.

FICCI (MESC) and NSDC have unveiled policy for the Media & Entertainment sector, recognizing its growth potential.

Animation sector has the opportunity of surpassing itself outside the entertainment sector. It has immense use in a number of sectors. Recognize the right University/Institution. Select the suitable program. Happy Animating. Good luck! 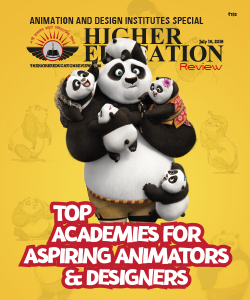