International University of the Year -2017

Leaving their nests behind, annually a plethora of dreamers from India manage to land into a foreign country only with a hope of holding a degree from a prestigious international university. A global view does not only eliminate stereotypes but leads teenagers to a broader understanding of the world and its issues. It will provide an insight into other countries with unfamiliar customs, unexplored perks and new beliefs.

Out of all this, educating in an international sphere lets the student be emotionally independent turning them into a mature soul who is always ready to confront any situation he is put in.

Accumulating these factors, it comes as no surprise that one of every five international students today is either from China or India. For instance, contributing $5.01 billion to the U.S. economy in 2015-16, the number of Indian students in the USA touched an all-time high of 165,918. Australia too has seen a spike in the number of Indian students, with 65,471 as of September 2017.

From the perspective of higher education experts, it has been comprehended that the education system of international institutions confers the students with the flexibility to explore the areas of their interests and later on to pursue them as majors. The universities in abroad are ardently focused on practical experiences and holistic growth, emphasizing on case studies and readings. The students are encouraged to analyze and solve real-world problems, enabling them later make enormous contributions to the world.

In order to facilitate the high demand of Indian students opting for foreign education, a variety of education fairs are been conducted across various cities in India. But the bombardment of information and the heavy weight of all the prospects and brochures settle students into a muddle to decide on the suitable university, which does not only complement their interest but also is parallel in terms of quality, rank and facilities. We at Higher Education Review, hence, following the required attributes, have articulated a list of excellent International Universities among the top 10 premiere destinations - US, UK, Australia, New Zealand, Canada, Singapore, Russia and Germany, as 'International University of the Year- 2017.' 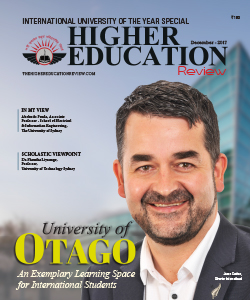