Perils of Higher Education in India

India is renowned from medieval times for the wisdom and advances made in the insemination of knowledge. However, recent statistics indicate that the Indian Higher Education is not oriented towards the right direction, which one logically expects from a nation, which has risen from the long periods of invasion by other countries. One should not forget that, even as our democracy is nearing its diamond jubilee, India is still a developing nation. The Government of India right from the post-independence era had visualised the need of promoting and strengthening the higher education sector. And the great political leaders of that era had the vision to attract Indian intelligentsia, trained abroad, to the nation to contribute directly to the prosperity of the common man. This article mainly focuses on how we can leverage more from the past achievements and efforts by the great Indian visionaries thereby evolve into a scientifically oriented, technically sound and ethically responsive society.

It is a well-established fact that except in space science and technology/atomic energy India lag far behind other nations. It is imperative that the problems and prospects of Indian higher education system should be subjected to proper screening and review by all stakeholders. The political leadership of the post independent era had shown the might to invite and sustain, PIO with exceptional talent to return to India, by offering suitable positions they deserve, commensurate with their training abroad. Prof C.V. Raman, Dr Vikram Sarabhai, Dr Homi J.Bhaba, Prof M.G.K.Menon and Prof E.K.Janaki Ammal are just a few examples from the past. There are also great Indian minds like Prof Thomas Kailath, Prof Jayant Baliga (''man with the largest, negative carbon footprint"), Prof S.Chandrasekhar and Prof V. Ramakrishnan and others who earned glory to India working abroad.

Higher education can be imparted properly only if the students do have a strong foundation of primary skillsï¿½listening, reading, and writing. A recent NASSCOM study indicated that a mere 15-20% of the engineering graduates in the country are empowered to take up the profession of a practising engineer. Another fact to be noted is that the number/percentage of students who actually graduate at the end of academic tenure is alarmingly low. The reasons for mass failures and ill-qualified graduates coming out of the colleges is the lack of proper checking mechanisms to control the quality of studentsï¿½the reasons are lack of motivation of the students, peer pressure on the parents from the society, and to some extent the greed to earn "fast money" and eagerness to reach the higher echelons of the society by fair means or foul. The whole education system is now "market-pushed" rather than "demand-pulled". It is quite natural that anything that is being pushed into the 'system' can cause clogging and reduce quality and efficiency. The proliferation of business oriented higher educational institutions is to be curtailed by the government/statutory bodies like AICTE, AIMC, AICME, AICA etc. It is heartening to note that this has been meticulously done by the central government for the past few years.

The teacher-centric learning model followed by the old schools of higher education is no longer relevant/effective in today's educational systems, as there are several sources of interference (abuse of mobile phones, etc), shortened attention span, and above all lack of properly trained faculty. It is also observed that excessive student politicking existing in government controlled institutes, also leads to loss of contact hours in classrooms which results in students not being properly exposed to the contents in the syllabi and beyond. This may lead to graduating without the expected value addition. Another concern is the lack of language skillsï¿½ability to read, write and speak cohesively in a foreign language, English. The steps were taken by the Chinese to address this lacuna with the help of the British Council, and Oxford and Cambridge Universities is worthwhile. Some of the Indian universities have noted this deficiency and have taken remedial measures including the above-mentioned collaborations in teaching English as a non-native language. In a similar manner, higher institutes of learning should also impart special training in developing soft skills of all students and also give credits for societal work, and to activities that imbibe a sense of responsibility and volunteering to give back to the nation, that has been assigned to NSS.

The remedies to the perils of Indian higher education are four-prongedï¿½the students should be motivated to feel that they can contribute creatively to the society, if they choose a program and subsequently a profession according to their latent talents/interests, rather than pushed-in to the system by the peer/parental pressure. The learned and experienced teachers and career gurus can play a significant role in this. The parents are also should be able to judge the capabilities (skill set and interests) of their wards and never force their children to select a program. The selection tests through a single entry, like the newly introduced NEET and the proposed NETE (National Eligibility Test in Engineering) from the academic year 2018 onwards is arguably the best option. One should also think of giving training to the true sons and daughters of the soil, who are not that affluent socially and economically so that they fare well in the highly competitive national level examinations. The policy makers should make it a point to reward excellence at all levels and for all players (faculty, students and managements) and take punitive action for corrupt practices.

The teachers should act as real eye-openers to their pupils. The good teachers must play multiple roles concurrently-that of a friend, parent, mentor/benefactor and sometimes that of a philosopher. Remember this Sanskritic verse, "yadha guru, thadha sishya", which translates to: "a student is just like the learned teacher". The research organisations/corporates also have a role in revitalising the curricula and syllabi to make the graduates distinguishably employable. The policy makers should support to gear the entire educational system towards new models of a student-centric classroom and learning-teaching process. The elected governments should also rise to the need of the hour so that all educational institutional institutions across the country are made free of politicking. The electorate should vote only in favour of the right kind of politicians so that the long-term interests of the nation are given top priority.

We should also look at possibilities of attracting global talent pool in the education sector to India on a mutually beneficial manner. In return, we can also think of developing global collaboration and acceptance by entering into partnerships. Since all educational systems are poised towards inclusiveness and equity globally, India as a nation cannot remain a silo in a fully connected, all pervasive highly competitive world. I would like to end this note with two very well known quotes--one by the father of the nation: a man of character will make himself worthy of any position he is given, which should be the driving force of all stakeholders. The second one by our people's President, Dr APJ Abdul Kalam is equally apt to the student community: you see, God help only people who work hard; that principle is very simple. 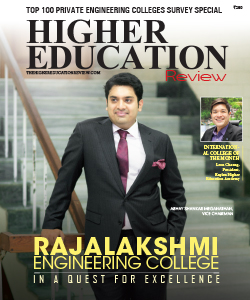